All the grades but one are in and...

I've got a 4.0 GPA this semester!  Only the Dramaturgy grade is still pending.  I'm not surprised; the protocol books that were our final project will take our professor quite a while to plow through.  With eleven of us in the class, that's a LOT of reading, even if all she does is skim to check on the nature & breadth of our research, sourcing methodology, and what we chose to include in the actors' resource packet.

If I get an A in Dramaturgy, I'll have two straight-A semesters back to back!  I didn't do badly the last time I got a BA, but I don't think I ever had a straight-A semester.  I know I didn't have two in a row.  I guess I learned some improved study habits while I was working.  It certainly made writing a lot less painful.  Whereas I dreaded it the first time I was an undergrad, now it's mostly a matter of figuring out my audience and thus how to focus and structure my writing.
Posted by Maureen at 9:35 PM No comments:

I finally heard back from the grad student/director about his theater project.  He couldn't find enough men to cast so he's putting the production on hold until at least the fall.  Too bad, because it sounded like fun.  Oh well; easy come, easy go.
Posted by Maureen at 9:25 PM No comments:

Sunday night I auditioned for a play being written by JW, a PhD candidate in Renaissance Studies; or rather, a play he wrote as an undergrad and is now revising.  It's part commedia del'arte, part English pastoral, with stylized presentation (movements, gestures, etc) in Act I and more realistic presentation in Act II.  JW struck me as very earnest, with an infectious enthusiasm for the project.  A little "Let's put on a show!", but I'm OK with that.  As long as it doesn't turn out like that abysmal original musical I did several years ago (which doesn't appear on my resume), and I don't think it will, this should be fun.

This was only my second-ever private audition (he's accommodating people's end-of-semester schedules).  I went in, he told me a little about the play, I performed my monologue, then read sections from a couple of scenes.  He had me do the second scene twice, using different characterizations.  He then told me he wants to use me and will let me know which role as soon as he has the rest of his cast.

This is the first time I've walked out of an audition knowing I had a role.  I'm sure it didn't hurt that I talked about my experience on the tech side - sewing, costuming connections, set building experience, and just being willing to adapt to the situation.

Today I auditioned for my first training film, for a community anti-terrorist (anti-radicalization?) program.  Again, I went in, we exchanged introductions, I read the first page of their script, a mock interview, and they seemed delighted.  I even get paid for this gig, so they sent me a W-9 and a contract to sign and return.  They'll be sending the script shortly, which they said would be "about 2-1/2 pages".  I hope they don't want to film too soon - that's a lot to memorize if most of it is my character, not the "interviewer".  This makes the second time I've walked out of an audition knowing I'm in.  Maybe I should buy a lottery ticket...

It's not often I get that "we love you" reaction when I audition, and twice in one week?  Gotta love it! :D

Posted by Maureen at 9:43 PM No comments:

Today was the last session of my Fundamentals of Theatrical Design class.  No final exam, thank heaven!  Instead, we had a final project due today - a Cornell box based on our design concept (earlier projects) for Sarah Ruhl's play, Eurydice.  We've been working on these in class over the past couple of weeks, with lots of helpful suggestions from our instructors, two MFA Design candidates (one scenic, one costumes).  I was amazed at how many different takes on the same story our class came up with, each of them with its own unique spark of genius.

I'm not thrilled with how my box turned out, but it isn't horrible.  Given that I've never tried anything remotely like it, I think it's OK, and some of my classmates had very nice things to say about it.  After literally losing sleep over it (I'd wake up during the night and my brain would start working on what to put in it, how to arrange this or that, how to anchor the glasses...), at this point I'm just relieved to have it behind me.  No idea what kind of grade I'll get for it, but I've got an A+ (101.56%, thanks to a bonus paper I turned in for "insurance") for everything else I've done this semester, so unless the instructors really hate it, I think I've got at least a B+ for the class. 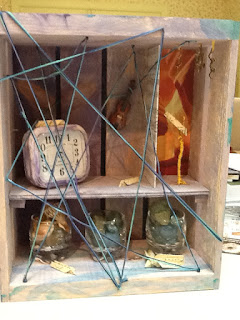 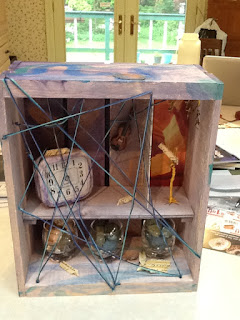 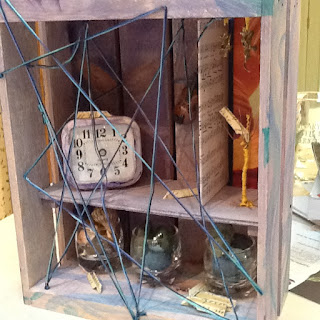 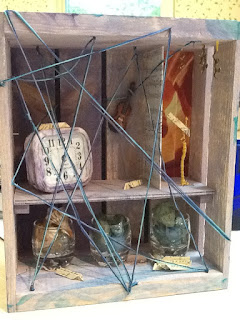 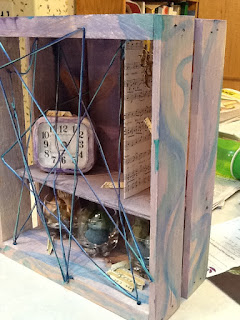 This was quite an education in techniques.  I had to decide what kind of paint to use on the box so the wood grain would show through; I settled on well-watered acrylics, and ended up not sealing it with anything.  Anchoring the shelf was another challenge; regular nails were too big, screws ditto, and finishing nails tended to push the shelf supports away from the box.  I ended up relying on wood glue, which was OK because the heaviest thing on the shelf is the clock, which has no battery in it.  I had to use glue to keep the string wrapped around the nails, and museum putty to anchor the clock and the glasses in the bottom.

One of the instructors suggested "distressing" the clock so it wouldn't look so new and the purple paint wouldn't look so bright.  I first sprinkled it with water and dunked it in the ashes in the grill.  That didn't really work - the ashes didn't adhere to the plastic very well - so I set it in some used coffee grounds overnight.  That did the trick; once I shook off the excess, it looked old (which it's not) and dirty (which it definitely is, now).

Some of it was fun, like the painting once I figured out what technique to use.  (Scene Painting tips and techniques came in handy here.)  The glasses were a happy thrift-shop find, as were the glass "pebbles", seashells, and dyed nutshells that went into them.  Lots of idea were raised and discarded along the way - this art thing is quite a complicated, drawn-out process! :D

Posted by Maureen at 9:22 PM No comments:

Hoping he loses this tax client

The Chief has been very busy the past couple of months with tax season, especially since he picked up 4 or 5 new clients shortly before the filing deadline.  One couple, however, I think he'd be happy to see go elsewhere.  They're not only flaky about their record-keeping, but they have yet to be on time for an appointment.  The capper, though, was that the Chief set up an appointment with the wife for this evening.  She agreed they'd be over as soon as the husband got home from work (he works a later schedule).  Two hours later, they still hadn't shown, hadn't called, and didn't answer when the Chief called to leave a voice message.  He had me proofread an email he was about to send, expressing concern that they hadn't shown and wondering if they were unhappy with his work and wanted to take their business elsewhere.  We'll see if he gets a response.

Fer cryin' out loud, how hard is it to CALL when you're running late or need to reschedule?!?  The Chief & I both tend to be punctual, so we have a hard time with people who are chronically late (sometimes by 20 minutes or more), or completely flake out and forget an appointment.  It strikes me as rude and inconsiderate.  The Chief is already planning to increase his rates in 2017 (his current rates are about half what Block charges).  I've told him repeatedly he also needs to include fines for lateness and no-shows, since his time is valuable.  If he's waiting for a no-show, that's an appointment slot that someone else could be using.  Not to mention the assumption that he's got nothing better to do than sit around and wait for someone who can't bother to be even close to on time, or call to say that "I'm stuck behind a 3-car pile-up" or what-have-you.
Posted by Maureen at 8:50 PM No comments: