In this week's Scene Painting class we played with creating the effect of marble.  I'm happy with how mine turned out.  I had a little trouble getting some of the effects I wanted, so we got into a little bit of a time crunch (no wonder we meet for a single 4-hour session!), but I still think my "marble" looks pretty decent.  The curving arc makes it look kinda like a geode.  Not bad for someone who'd never attempted anything like this until I started this class. 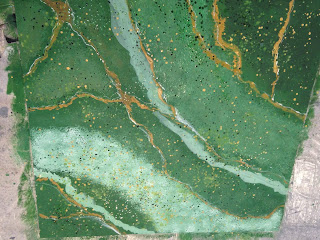 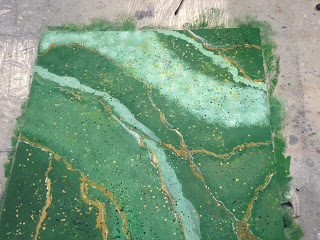 This singing stuff is an unpredictable business.

Yesterday's voice lesson was one of those that happen every so often and make you wonder why you bother.  Seemed like everything I tried to sing below the staff was mushy, muddy, back in the throat - you name a technical problem, I had it.  My low audition piece (lots of it below the staff) was giving me so much trouble that my teacher and I both decided that I would definitely not be using it for the audition I had last night.  Five hours just wouldn't be enough to whip it into shape.

So that audition last night.  I sang my two higher pieces (one G&S, one Rodgers & Hammerstein).  They both felt good, the audition panel laughed (they're comic pieces, so that's a good thing), and the audition accompanist sightread like a champ and followed nicely, so it was all good.  I'm sure it helped that we'd touched on both pieces in my lesson yesterday afternoon, so all those technical niceties were fresh in my mind.

This afternoon was the mock run of next Saturday's NATS competition.  C has 7 students who'll be competing and 6 of us sang this afternoon.  We had an "adjudicator", we stood in the crook of the piano to sing, just as we will next week, and we were coached in how to introduce ourselves and our pieces.  C had us in age order, starting with her youngest students, which meant I "batted clean-up".  It wasn't too bad being last, as I only had to wait through 5 other people's music.  Having had the benefit of C's training, they all did well.  I got a little over-the-top with my brindisi, which caused one of my notes to "splat", but in general I was pretty happy with how it went, and did have fun singing the music.  Better, C was delighted with how my lowest song went.  She thought it was worlds better than yesterday and was very happy with how quickly I'd managed to incorporate her corrections.  Now if I can just manage to keep them in mind through the week so I've internalized them by next Saturday, when I have to sing for the judges...

The Chief came along for the ride.  (It helped, I'm sure, that I promised him dinner afterwards at a nearby restaurant we love.)  He said that, when I was warming up in the car going over, he wasn't so sure how I'd do, but thought that when it came down to it, I did just fine. :)
Posted by Maureen at 10:19 PM No comments:

I'm registered in Chorale as one of my classes this semester.  This has already meant an outside rehearsal (this afternoon), with more coming up.  Our first performance series consists of 3 concerts split between 2 venues, about 30-40 miles apart.  We got an email earlier this week with the schedule, including when we have to be on the buses.

We're also on tap to sing at a directors' conference in mid-March.  That one's out of town, which means packing an overnight bag (and probably sharing a hotel room with a fellow chorister).  Because we leave late on a Friday morning, I also have to arrange to make up my Scene Painting work for that day.

I never realized, when I registered, that I was signing up for a "travel team"! :D
Posted by Maureen at 8:57 PM No comments:

Today was the first day we actually painted in Scene Painting class.  (Last week was the customary administrative stuff, "getting to know you" session, and a quick tour of the building.)  Today was about creating visual texture. We practiced several techniques that were new to me:

- painting with a brush on the end of a pole

- wet blend (paint, then water on the brush, so the colors combine readily), using X strokes
- scumbling (near as I can tell, it's like wet blend, except that the colors remain somewhat discrete)
- spattering (tips: keep the brush horizontal, don't use too much water unless you want the color to be diluted, don't use a brush with really stiff bristles)
- using a sea sponge (wet or dry) for dappling or blending
- using a feather duster(!) to dapple or blend
We each had a 4' x 4' board to practice on.  Some of my classmates are definitely artists and had very good-looking results.

Interestingly, nearly everyone else had darker, more muted colors, in part because of the way their colors blended.  I chose bright blue, green and yellow, so I had the one board with fairly bright colors.  Our instructor said they made her happy. :)  I was pleasantly surprised that something I dove into with no plan and no real clue what I was doing turned out reasonably well.  I painted a thing and I actually kinda like it! :)  (That funny-looking stick-like thing in the middle is just some dribbled paint.) 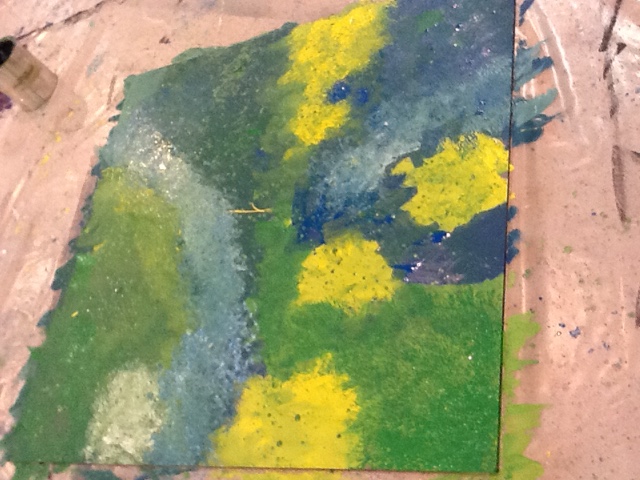 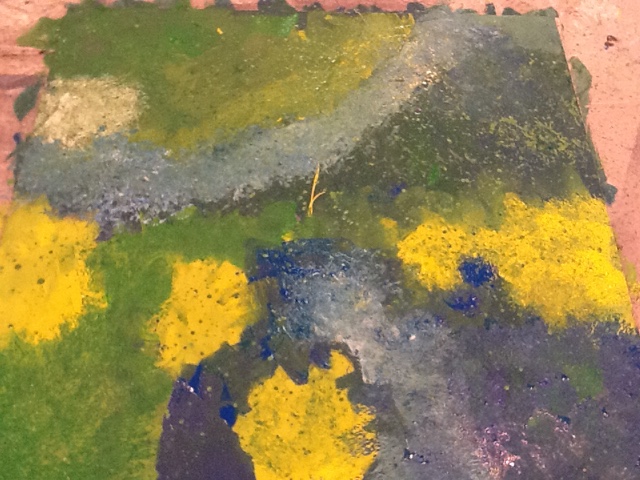 I used the sponge on this corner to get the streaky effect here: 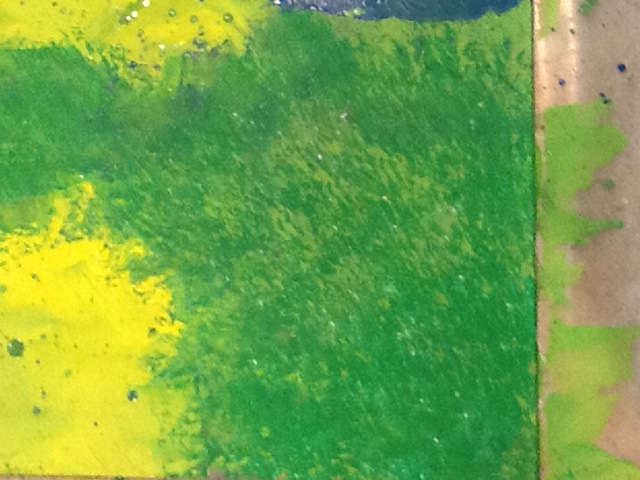 Some spatter and just a touch of feather duster: 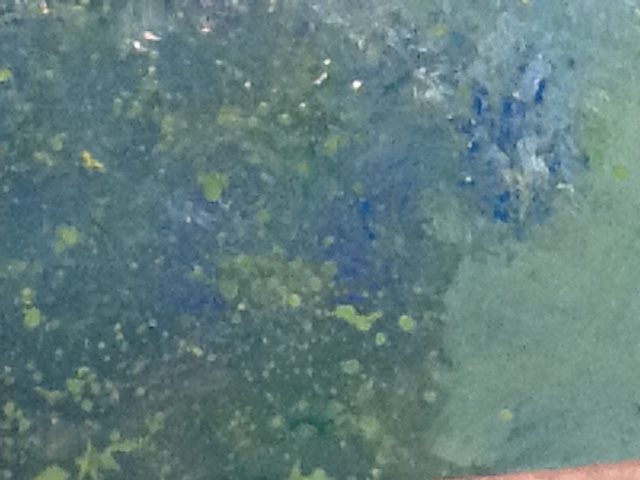 Here are everyone's boards (the one on the brown paper is the instructor's demo): 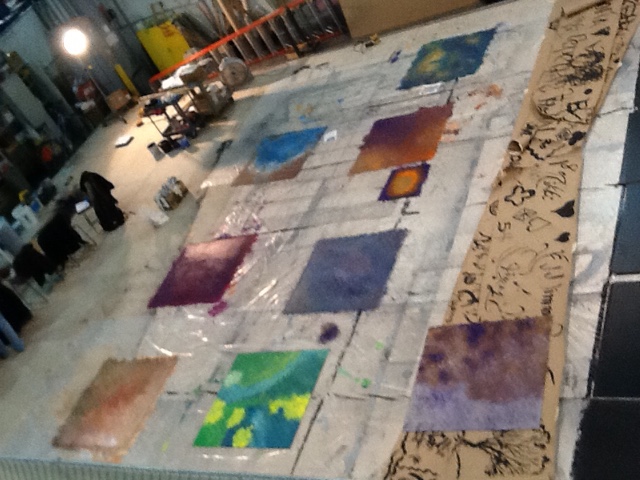 Posted by Maureen at 8:54 PM No comments:

Been a very eventful few weeks

The biggest event was that Dad finally succumbed to his health issues on Jan. 15th.  We're relieved for his sake, and glad he's reunited with Mom, but of course his passing leaves a big hole in our lives.
The Chief and I flew out for the funeral.  My siblings planned a very nice one, so we gave him a good send-off.  (Mom would've loved the music.)
Getting back was tricky, however.  The East Coast got hit with a blizzard that weekend (one of Dad's cousins and his wife decided, wisely, not to fly out), so our flight home Sunday was cancelled.  We finally got home Monday afternoon.  Classes were cancelled both Monday and Tuesday, which gave me a little time to get ready for a new semester at a new school.
Getting into the new semester has been tricky because I was waitlisted for two classes I needed.  I did manage to get into both, but I only got approved for the second one yesterday, and didn't get my shop hours scheduled until this morning.
This has made it hard to reschedule my voice lesson, too.  C's schedule is pretty full, so I was afraid we might not be able to work something out.  As it is, I couldn't get a lesson this week, but we did work something out.  Good thing, with NATS only a few weeks away!
Posted by Maureen at 12:29 PM No comments:

Classes have been in session for about a week now, my schedule is finalized at last, but I'm still feeling unsettled.  Part of it is that no two days have the same schedule, but there's also the fact that my of my classmates seem to know each other.  Ah well, I've done this before; once in 2nd grade and again in 8th.  At least this time I have the advantage of perspective and experience.  I know I'll live, and at this level people are far more likely to ignore the new "kid" than pick on her, especially given that she's probably at least as old as their parents. ;)
Gonna be a busy semester.  I'm taking 14 credit hours, and I can see already that I'm gonna be quite busy with reading and researching design projects.  My two "artsy" classes - Fundamentals of Theatrical Design  and Scene Painting - are a bit intimidating because I have never felt that I had much design imagination or *any* drawing ability.  They'll certainly challenge me, pushing me to step way out of my comfort zone and to force my imagination to get off dead center and do something.  Wish me luck!
Posted by Maureen at 12:15 PM No comments: